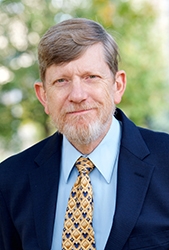 "After retiring as an Army Judge Advocate, I was honored and delighted to have the opportunity to come to Chase. To be a part of a community like this one, with both full and part-time students becoming exceptional lawyers, is a rare gift. Chase students are impressive in the dedication they bring to learning, and they demonstrate in the classroom skills that will soon be a real asset for their clients."

Before arriving at Chase in 2006, John Bickers served in the Army for more than two decades. A Judge Advocate for most of his career (after a brief stint in tanks), he has been a prosecutor, a defense counsel, and administrative law attorney, a manager of a law office in Germany, and a teacher at the United States Military Academy in West Point, New York.

Professor Bickers earned an A.B. from Cornell University, where he majored in history. Later he received a J.D. from the University of Michigan, and still later an LL.M. from Georgetown. He teaches Constitutional Law and Professional Responsibility.

His research interests include Constitutional history and fantasy football, although he has never published on the latter. A plurality of the United States Supreme Court and the Court of Appeals for the D.C. Circuit have approvingly quoted his writing.

“Asculum Defeats: Prosecution Losses in the Military Commissions and How They Help the United States” 4 National Security Law Journal 201 (2016).

Two Figures in the Picture: How an Old Legal Practice Might Solve the Puzzle of Lost Punitive Damages in Legal Malpractice, 35 N. Ill. U. L. Rev. 35 (2014) SSRN

Too Little, Too Late? Why President Obama's Well-Intentioned Reforms of the Military Commissions May Not Be Enough to Save Them, 31 Whittier L. Rev. 381 (2010) Hein Online

The Power to Do What Manifestly Must Be Done: Congress, The Freedmen's Bureau, and Constitutional Imagination, 12 Roger Williams U. L. Rev. 70 (2007) Hein Online  SSRN

""From Foe to Friend:  The Law of War and Slavery," Common Cause: Synthesizing the Work of Human Rights and Civil Rights Scholars and Practitioners, Northern Kentucky University (April 2019)