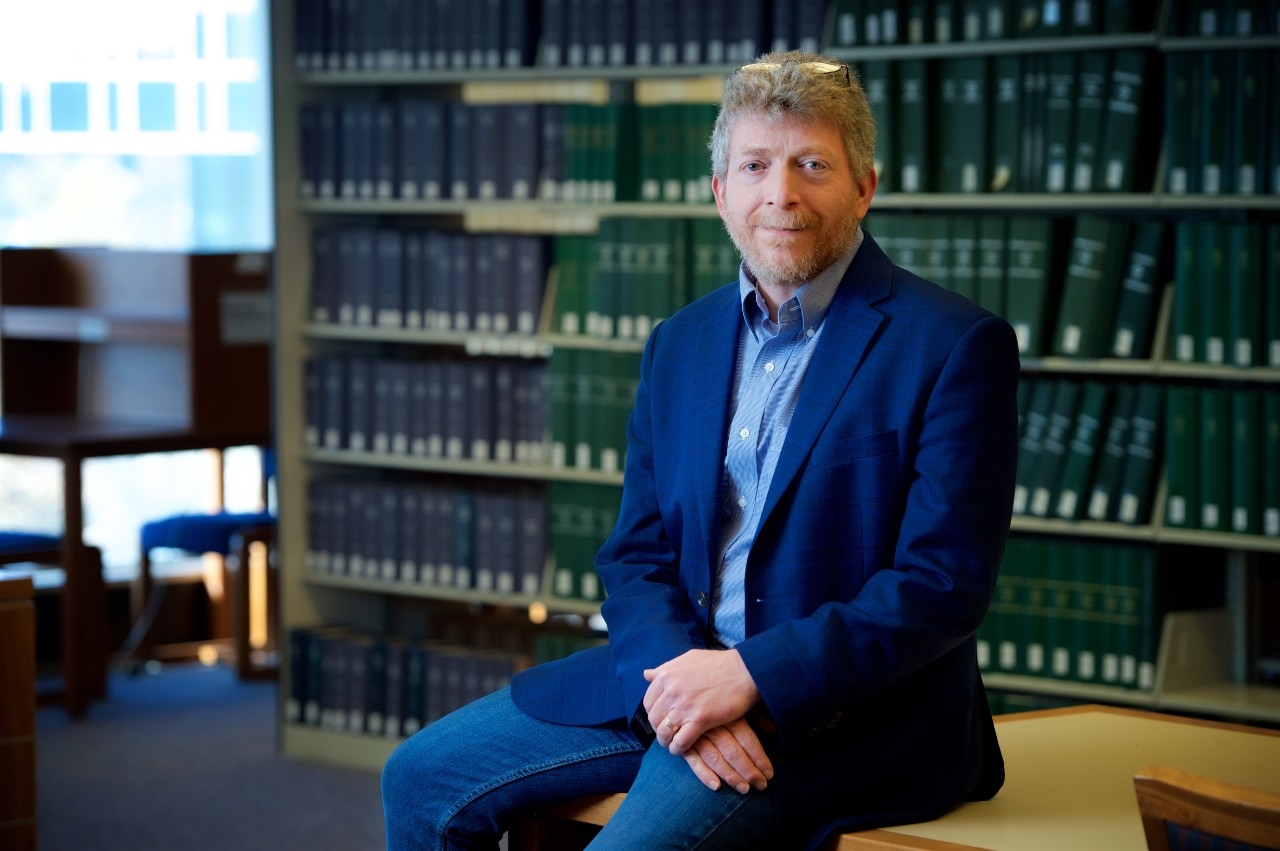 Professor Michael Mannheimer is a busy man at Salmon P. Chase College of Law: He teaches, he supervises a clinic-style program, he speaks at forums, and he writes – a lot.

Along with being the author of more than two dozen law review articles, numerous scholarly papers and commentaries, he is the author of a forthcoming book on how the Fourth Amendment – originally a constraint on the federal government and later applicable to the states through the Fourteenth Amendment – could be applied in a reimagined approach to local policing. The publisher is the University of Michigan Press.

As a man of words, Professor Mannheimer has some words about the book, how he sees the linkage of the Fourth and Fourteen Amendments to the United States Constitution, how laws and policing might be different under his view, and, of course, the process of writing the book:

In brief, what is The Fourth Amendment: Original Understandings and Modern Policing about?

So what are your conclusions on the original understanding of the Fourth Amendment?

“My research – which has been published in a trilogy of law review articles that form much of the first few chapters of the book – has suggested that the Fourth Amendment was, in large part, understood in 1791 as a federalism provision. The Fourth Amendment preserved each state’s ability to regulate searches and seizures that took place within its borders.

“The primary way in which states regulated searches and seizures was to allow the victims of wrongful searches to sue in tort, usually for trespass or false imprisonment. The Founders wanted to preserve each state’s ability to hold federal officials accountable through its tort law. So, a search or seizure by a federal customs official or tax collector might be tortious – ‘unreasonable’ – in one state but not another.

“Warrants bestowed immunity from suit, so the framers and ratifiers wanted to ensure that the federal government did not set too low a bar for the issuance of warrants, because that would defeat state tort liability for victims of oppressive federal searches and seizures. So, the Fourth Amendment establishes, through the Warrant Clause, a general, nationwide floor for the issuance of warrants, but, through the Reasonableness Clause, leaves everything else up to state law. An ‘unreasonable search or seizure’ in 1791 was essentially one that violated state law.

Then what does the Fourth Amendment mean when applied to the states?

And, your answer to that question?

“My conclusion is that the framers and ratifiers of the Fourteenth Amendment likely understood that it would apply constraints on searches and seizures against the states, but they also likely did not understand it as applying a uniform, national set of search-and-seizure rules to the states. They really cared about protecting Blacks, loyal whites and Northerners in the former rebel states, but they also wanted to maintain the country’s essential federal structure, even though those two goals are in some tension with each other.

“I contend that the way they reconciled those two goals was that they understood freedom from arbitrary searches and seizures as a ‘privilege or immunity’ of American citizenship, but they also understood that states would be free to secure that ‘privilege or immunity’ in a variety of different ways, so long as they abided by equal protection and due process principles.

“I suggest that that means that state agents, in searching or seizing cannot discriminate, have to follow state law and cannot be given excessive discretion. I call these the principles of nondiscrimination, legality and nondelegation.”

Is this where the “Modern Policing” part of the book title comes into play?

“Exactly. Legislatures make law, executive officials enforce it. Overall, it’s about democratizing policing, leaving most decisions about policing policy to the democratic process at the state and local levels. But there’s an important caveat. Remember what I call the nondelegation principle. If a legislature authorizes police to search and seize, but delegates too much authority to police to decide when and how to do so, it is no better than if the police were to have no legal authorization at all. At that point, police are essentially making law, not just enforcing it.”

What is an example of how current law would be different with your view?

“For one thing, traffic stops and arrests for petty offenses would look a lot different. Under current Fourth Amendment law, a police officer who witnesses even the most minor traffic violation has discretion to decide whether to stop the motorist or let them go on their way. Likewise, an officer who has probable cause to think even a very minor offense – jaywalking, spitting on the sidewalk – has been committed has discretion to decide whether to arrest, issue a ticket or ignore it.

“This gives police enormous power because, unlike more serious crimes, every one of us commits traffic violations and petty offenses on occasion. Current law gives police the unbridled discretion to select from the universe of people who commit these offenses – virtually everyone – whom to stop or arrest.

“I would require that the states, their political subdivisions, or the law enforcement agencies themselves, draw up detailed regulations to strictly limit police discretion.

“For example, legislation or administrative guidelines could either require or forbid arrests for particular minor crimes. Or they could forbid arrests for traffic offenses or minor crimes unless there are reasonable grounds to think the perpetrator will pose an imminent danger to public safety if allowed to proceed unhindered. Or they could forbid traffic stops unless the officer witnesses traffic violations adding up to a certain number of ‘points’ on a person’s license.

“Whatever method the state chooses to limit police discretion in this context becomes part of the law for purposes of ‘due process of law,’ so a violation of these ‘subconstitutional’ rules becomes, in effect, a violation of the Constitution as well.”

You said that the state could require arrests for certain minor offenses and that would be okay. It seems counterintuitive that more arrests for minor crimes would be an improvement. Can you explain that?

“The big problem with excessively broad discretion is underenforcement – the discretion police have to ignore infractions by the privileged many and enforce the law only against the unlucky few.

“We can solve that by requiring enforcement against everyone. But there probably won’t end up being more arrests because legislators would have to think before they approve such a measure: ‘How many of my (white, middle-class) constituents will be arrested for jaywalking or littering before I’m booted out of office?’ It’s a representation-reinforcing view of the Fourth Amendment: Whatever search-and-seizure rules the majority would impose on the minority, they also have to impose on themselves.

“Instead, what we have today are rules that ostensibly apply to everyone equally but police have so much discretion that we end up with really stark inequalities – racial and otherwise – in policing.”

You’ve written a lot of law review articles, but this is your first book. What have you found to be the difference – or the similarity – between writing an article and writing a book?

“A good law review article typically has a three-part structure: This is what the law is, this is what’s wrong with it and this is how to fix it. A book is much more freeform. That is liberating, but it’s also daunting. There is just so much I could write, and so many different ways I could write it, and I have to be very deliberate with my choices.”

How have you been going about the “work” of writing the book?

“I had a sabbatical coming up, and I knew that that was the only way I could take a really deep dive into the Fourteenth Amendment, to figure out how, if at all, the Fourth Amendment should be thought to apply to the states.

“The first half to two-thirds of my sabbatical was spent mostly immersing myself in the primary and secondary sources on the Fourteenth Amendment. That includes slogging through much of the Congressional Globe, forerunner to the Congressional Record, for 1866 (then, as now, members of Congress could talk a lot without saying much).

“The last few months were spent mostly trying to put it all together in a coherent way. But it’s like drinking from a fire hose; there’s a lot of information and I have to figure out how to present it, so I have been continually re-thinking how to do it.

“I set deadlines for myself for writing chapters, but I sometimes have had to break them. For example, what I originally thought was going to be chapter seven has now turned into chapters seven, eight and nine! Obviously, I had to set a new deadline when one chapter became three.”

• At Chase, Professor Mannheimer has taught Criminal Law, Criminal Procedure, Death Penalty, Evidence and Sentencing. He is the faculty coordinator for the Kentucky Innocence Project.

• His research and scholarship includes law review articles and presentations on topics such as the death penalty, coerced confessions and constitutional matters involving establishment of religion, freedom of speech, self-incrimination, confrontation and cruel and unusual punishments. Among his most recent law review articles is Vagueness as Impossibility, 98 Tex. L. Rev. 1049 (2020). He is an elected member of the American Law Institute, the almost 100-year-old organization known for its Restatements of the Law and scholarly publications.

• Professionally, he co-chaired the Kentucky Death Penalty Assessment Team for the American Bar Association, and testified on its findings before a Kentucky General Assembly committee.